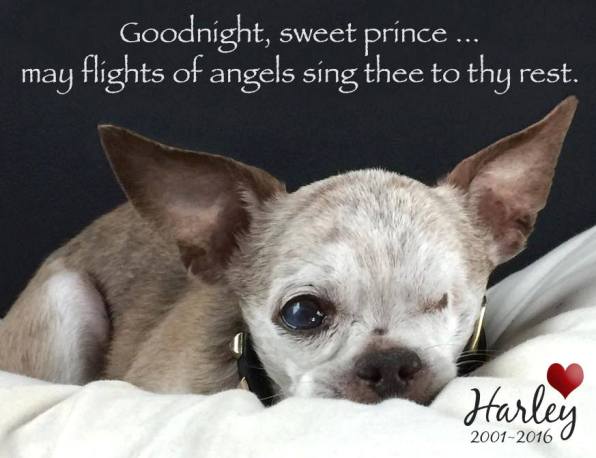 Harley, a 15-year-old Chihuahua who spent the first 10 years of his life in a puppy-mill cage before become a “spokesdog” against these cruel facilities, died yesterday.

“He went on his own terms … he chose his moment, he did not suffer, and he was not in pain,” wrote a friend of his family on Harley’s Facebook page. “He passed peacefully, surrounded by the love of his mom and dad.”

“It was just four years ago that he was pulled from the cage in the puppy mill and left to die,” said his dog mom, Rudi Taylor, when she accepted the award. “We never would have ever thought he would live this long and make such a difference for so many puppies.”

Rudi’s husband, Dan, added that Harley had an indomitable spirit. “That spirit is allowing him now to be the voice for dogs who cannot speak for themselves…and give everybody hope that tomorrow’s going to be a better day,” he said at the awards ceremony.

While living in the puppy mill, Harley suffered heart disease, a fused spine, broken tail, gnarled toes, deformed legs and rotted teeth. He lost an eye when his cage was power-washed while he was still in it (believe it or not, this is a common practice in puppy mills).

Harley was rescued in 2011 by the Taylors, who were told the Chihuahua would probably only live for a couple of months. But Harley thrived and was able to spend almost five years with his loving forever family in Berthoud, Colo.

He became the inspiration for the “Harley to the Rescue” campaign, which raises funds to rescue and provide medical care for more other puppy-mill dogs. Harley went along on the rescue missions to comfort the sad, scared dogs.

“As you all know, Harley’s life was very public,” Rudi wrote on Harley’s Facebook page today. “He didn’t only belong to Dan and I, he belonged to you — his friends, his people.”

Harley spent his last night as he usually did, happily cuddled between his pet parents.

“We were in bed and he was so happy getting a belly rub from Dan,” Rudi wrote on Facebook. “Right after that belly rub, he gave us both kisses and then he went to sleep. Harley was a funny sleeper, always changing positions — on his back, tucked under my chin or into Dan’s armpit — he wasn’t easy to sleep with, but we never complained.”

Rest in peace, Harley. My condolences and gratitude to Rudi and Dan for turning his tragic life around and spreading awareness about the horrors of puppy mills.

To honor Harley and help save other puppy mill dogs, you can make a donation to the Harley to the Rescue campaign. And be sure to tell anyone who’s looking for a new dog to adopt, not shop!

Precious Harley, your life mattered so very much and your legacy will live on for a long, long time to come. pic.twitter.com/DW7TvRAS3J