UPDATE: The hero is no longer a mystery! It was dog lover Tim Tawater, a 20-year veteran of the Nashville Fire Department, who rescued Sampson, a young, 82-pound Bouvier.

“I’ve had dogs ever since I was born,” Tawater told WSMV this afternoon. “You got to figure that if there’s a dog in the house, the dog is definitely family.”

The homeowners, Brandon and April Gorley, got a call about the fire as they were starting a vacation in Gulf Shores. They immediately returned home. A relative who had been housesitting was out running an errand when the fire broke out.

The Gorleys met Tawater this afternoon. “He didn’t have to go into a house that was on fire,” Brandon told WSMV. “Deeply, deeply appreciate him being there.” 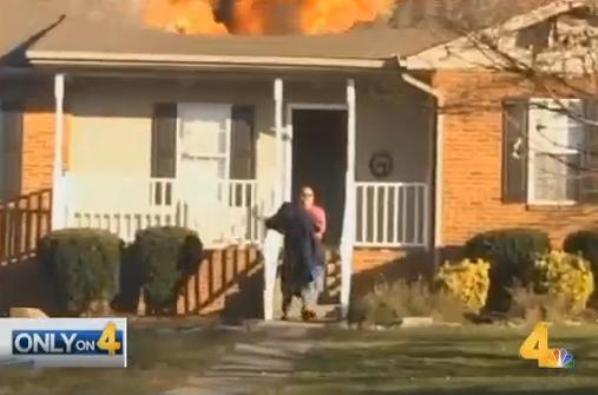 A man driving his gray Mustang down a White House, Tenn., street late Saturday afternoon stopped when he saw people gathered outside a house on fire.

Did he wait with them for help to arrive? Nope.

When he found out there were pets inside, the unidentified hero ran into the burning house and emerged a couple minutes later, carrying a large black dog. About 30 seconds later, the roof of the house collapsed.

Jimmy Nichols, a keyboardist for singers like Reba McIntyre and Faith Hill, captured the rescue on video.

“[He] says, ‘I do this for a living,’” Nichols told WSMV. “The dog was scared to death, but he saved this dog. It was incredible to see.”

The mystery man in the gray Mustang drove off without leaving his name.

“It was so weird — he just took off,” Nichols said.

The dog’s owners were out of town, so he was taken to a friend’s house. Unfortunately, the house was destroyed by the fire, which started in the attic. Three cats are still missing.

Nichols and others in the neighborhood — especially the homeowners, I assume — are hoping the hero comes forward so they can thank him.

“He’s got the love and respect of this whole community,” Nichols told WSMV.