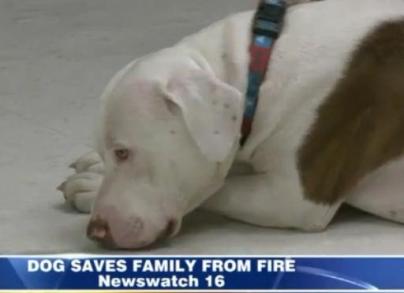 A Pit Bull named Lou, who had been saved from an abusive owner, apparently decided to “paw” it forward to the family who rescued him.

When a fire broke out early Saturday morning in Chris Julian and Kelly Yarbrough’s Carbondale, Penn., house, Lou woke them by barking frantically.

“There`s a fire behind the door. I grabbed the door. It was red hot,” Julian told WNEP. “All I screamed was, ‘Call 911! There`s a fire,’ and by the time I got back to the room, there was no time to think.”

“The fire was coming through the door and the dog saved our lives,” Yarbrough said. “If it wasn’t for him, we’d all be dead right now.”

Although they lost almost everything they owned, the couple, their two younger children and Lou were able to escape without any injuries.

The couple’s two older children weren’t home at the time. Yarbrough told WNEP it was very fortunate that the family had watched a movie together in the master bedroom Friday night, and the two younger children had fallen asleep on the floor. Had they been in their own bedrooms, “I probably wouldn’t have been able to get them out,” she said.

The cause of the fire is under investigation.