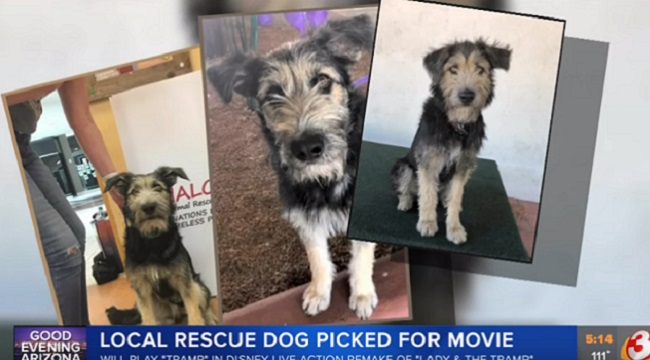 The good news: Disney has made a live-action version of its 1955 animated classic, “Lady and the Tramp” (affiliate link) that features a cast of rescue dogs.

The even better news: The highly coveted role of Tramp isn’t played by some fancy, purebred dog. The part went to a 2-year-old former shelter dog named Monte.

Somehow last year this adorably scruffy Terrier mix ended up in the Animal Services Center of the Mesilla Valley (ASCMV), a kill shelter in Las Cruces, N.M. ASCMV is an extremely high-intake shelter. According to its website, it received nearly 10,000 animals in 2016. The nonprofit HALO Animal Rescue partners with ASCMV and helps save lives by taking in plenty of the shelter’s overflow homeless pets.

ASCMV typically sends HALO about 50 dogs at a time. “Monte was a part of that lucky load on April 26, 2018,” HALO President and CEO Heather Allen told the Las Cruces Sun News.

Fortunately, Monte wasn’t homeless for long. Allen said the ASCMV shelter noted that he was “super friendly, greets people right away, gives kisses, loves attention, he knows how to sit, and walks well on a leash.” Along with all of those excellent qualities, he happens to have another special attribute. Monte has a strong resemblance to the animated version of Tramp, which is why he caught the eye of animal trainer Mark Forbes.

Monte was adopted and trained him for the role. But he’s not just a movie star — he’s a regular pet. “They send us photos of him from home,” Allen told the Sun News. “He has a great family.”

Monte won’t be doing his own barking in “Lady and the Tramp.” His voice will be provided by actor Justin Theroux, who in real life is the dog dad of Kuma, a Pit Bull who was rescued during Hurricane Harvey. A Cocker Spaniel named Rose is playing Lady, with her voice provided by Tessa Thomson. The voice cast also includes Janelle Monáe as Peg, Sam Elliott as Trusty the Bloodhound, Benedict Wong as Bull and Ashley Jensen as Jock.

Monte isn’t the first and hopefully won’t be the last shelter dog to find a loving home…and fame. Among these lucky pups is Bowdie, a Poodle mix rescued by animal trainers Bill and Dorothy Berloni. Bowdie pretty much stole the show as Nana in “Peter Pan Live” when it aired on NBC in December 2014. Even more impressive was the fact that it was the first time in a production of this musical that Nana was played by a real dog, not an actor in a dog costume.

Monte is the first dog taken in by HALO Animal Rescue to make it big.

“In 25 years of helping animals move on, we haven’t had a movie star,” Erin Denmark, the organization’s outreach manager, told 3TV/CBS5. “So we’re getting goosebumps constantly when we hear the phone ring and people wanting to hear more about Monte and his life in Hollywood.”

The live-action “Lady and the Tramp” debuts Nov. 12 exclusively on the new Disney+ streaming service.

JUST ANNOUNCED: Get a first look at the live-action Lady and the Tramp and more Disney magic headed to #DisneyPlus in the latest issue of “Disney twenty-three”: https://t.co/hQMdeDsF1Y pic.twitter.com/BlYN4gwAlO