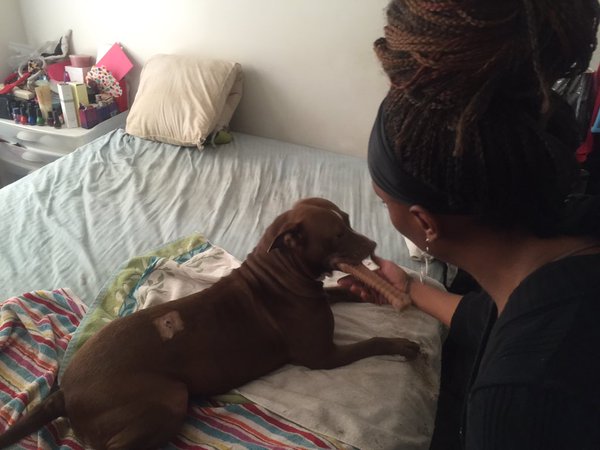 At first LaToya Plummer of Greenbelt, Md., couldn’t figure out why her service dog, a Pit Bull mix named Cleo, was limping and bleeding as they left a dog park Sunday.

Because she is deaf, Plummer could not hear the gunshot that sent a bullet into Cleo’s side. It was fired by an unidentified off-duty Metropolitan Police Department officer who claims Cleo, with her teeth bared, aggressively charged her and her small dog.

Plummer finds this difficult to believe. “She is the most calm and gentle of my dogs,” she told WUSA 9 through an interpreter.

The officer immediately reported that she’d shot a dog, but by the time Greenbelt Police officers arrived, Plummer — thinking Cleo had been bitten by another dog — had rushed her injured dog to a vet.

It’s unfortunate that no one witnessed the shooting. Even if Cleo did run toward the officer, it seems both dangerous and unnecessary to fire a weapon at such a public place.

“I think she should be charged with felony animal cruelty,” Plummer told WUSA 9.

Plummer said Cleo was walking behind her when the shooting occurred. She didn’t say why she wasn’t keeping an eye on her or why Cleo was off-leash outside the dog park.

The Greenbelt Police Department is investigating the case and has not yet filed any charges.

As for Cleo, WUSA 9 reports she is a very lucky dog and is making a “remarkable” recovery.