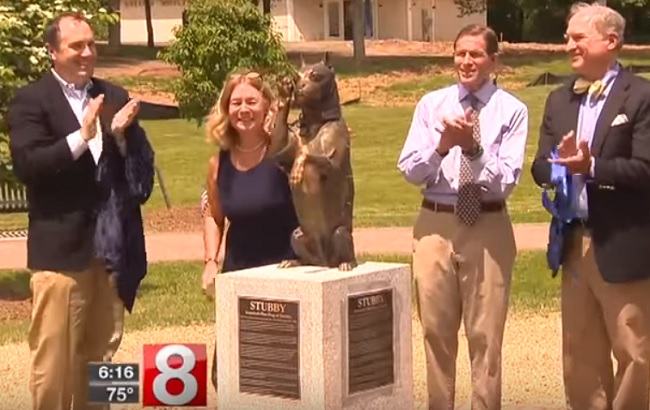 Over a century after he bravely served in World War I, Sgt. Stubby, the most decorated war dog in U.S. history and the only one to be promoted to sergeant, is finally being honored with a monument.

Stubby, who is believed to have been a Boston Terrier/Pit Bull mix, was rescued in 1917 when John Robert Conroy, a soldier training for World War I combat, saw the stray dog on a field at Yale University. When Conroy’s unit was shipped off to France, he wrapped Stubby in an overcoat and smuggled him aboard. Conroy taught the dog to salute his commanding officer, which was so endearing that the officer allowed Stubby to stay.

Stubby became the “unofficial official mascot” of the 102nd Infantry, 26th (Yankee) Division. As he recuperated after being hit in the leg by a grenade, he kept other injured soldiers company and helped lift their spirits.

After his leg healed, he returned to the trenches and survived being sprayed with mustard gas. He was able to use his sense of smell and what he learned from this experience to help warn his fellow soldiers of impending gas attacks, and saved many lives. His excellent hearing allowed him to detect the whine of artillery before the soldiers could. He’d bark to warn them to take cover, saving even more lives.

Among his other heroic deeds were capturing a German spy by the seat of his pants, and allegedly preventing a little girl from getting hit by a car in Paris.

After he died in 1926, Stubby was stuffed and his body is on display in the exhibit “The Price of Freedom” at the Smithsonian Institution. Last month, the animated movie “Sgt. Stubby: An American Hero,” which told the story about this amazing dog, premiered in theaters.

For decades, members of Conroy’s family have been trying to create a memorial for the hero dog. “Stubby Salutes,” a fitting tribute, was sculpted by artist Susan Barary. She’s known about Stubby for 25 years and has wanted to create a sculpture of him for a long time, the Hartford Courant reports. She said she’s inspired by the bond between people and animals, as well as the love between Stubby and his fellow soldiers.

A plaque on the statue’s pedestal says Stubby is “America’s First Dog of Service” and served with his friends “in their battles, hardships, sorrows and joys. He was a morale booster.”

The $80,000 statue was paid with donations, including $30,000 from the nonprofit U.S. War Dog Association, which honors U.S. military dogs and their handlers. Conroy’s family hopes that interest in Stubby will raise awareness and support of organizations that train service dogs for veterans. You can find out more at sergeantstubbysalutes.org.

More About the Amazing Sgt. Stubby: