The latest recall includes these 12-ounce cans of these products (the numbers are the second half of the barcode, found on the back of the product label):

The products have expiration dates of December 2019 through January 2021. They were distributed online and through independent boutique pet stores nationwide. According to Evanger’s, this voluntary recall affects only Hand Packed Beef Products, in which the meat is placed in the can by hand, not machine.

How the heck did a euthanasia drug end up in dog food?! 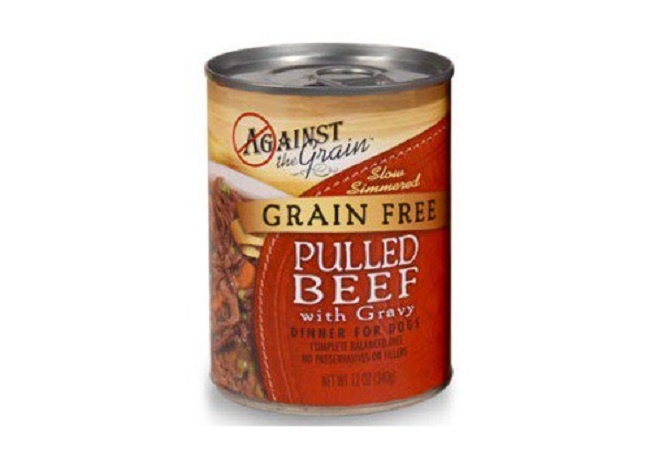 Traces of pentobarbital, a drug used to euthanize dogs, have been discovered in one lot of Against the Grain Pulled Beef with Gravy Dinner for Dogs canned dog food that was manufactured two years ago.

“Against the Grain takes full responsibility of its products, and despite having no affected products on the market and no reported illnesses in the lifetime of the brand, has decided to proactively initiate a voluntary recall out of an extreme overabundance of caution,” the company stated on its website.

Earlier this month, Evanger’s recalled one lot of Evanger’s Hunk of Beef Au Jus canned dog food for the same reason. In late December, a Pug named Talula died after eating the Evanger’s food. Five other dogs were sickened.

According to Food Safety News, members of the same family may own both companies.

When ingested, pentobarbital can cause side effects like “drowsiness, dizziness, excitement, loss of balance, nausea nystagmus (eyes moving back and forth in a jerky manner), inability to stand and coma,” according to the voluntary recall announcement from Against the Grain Pet Food Inc. No illnesses have been reported to date.

The following product has been voluntarily recalled. It was distributed to independent pet retail stores in Washington and Maryland in 2015, and is no longer on any store shelves.

Against the Grain Pulled Beef with Gravy Dinner for Dogs
12-ounce cans
Lot number: 2415E01ATB12
Second half of UPC code (located on the back of the product label): 80001
Expiration date: December 2019

If you bought one of the recalled products, return it to the place of purchase to receive a full case of Against the Grain food. For more information about the recall, call 708-566-4410 between 11 a.m. and 4 p.m. Central Time, Monday through Friday.